Finally ready for the future with this convenient Jacob Hooy CBD Aqua spray. 10ml CBD that is water-soluble so you can take it everywhere and add it discretely to your fruit juice. Never go outside without CBD. CBD Aqua is soluble in water. A pump with the spray in a glass of water or any other liquid, which allows you to drink it easily and quickly.

CBD Aqua is soluble in water. Because it’s water-soluble, the body quickly takes it up. A pump with the spray in a glass of water or any other liquid, which allows you to drink it up easily and quickly.

Because of the CBD Aqua’s very direct and quick effect, you can take less CBD to obtain the same effect as with oil. As you can take in less CBD so your bottle of Aqua CBD will also last longer.

Taking in CBD in a discrete way

A convenient dosing pump comes on top of the CBD Aqua bottle. Thanks to this pump, you can take in the spray directly via your mouth, or dose it in a glass with juice. As you won’t notice the CBD, you will be able to consume your daily dose of CBD without a nasty aftertaste or comments by other people.

After starting almost 300 years ago with his shop as a spices stall, Jacob Hooy has now grown to a renowned company. Within homeopathy Jacob Hooy has made its name with several authentic retail shops. Quality is priority and Jacob Hooy CBD is no exception to this. For some reason they are purveyor to the Royal Household.

In 1743 Jacob Hooy opened a spice stall at the Amsterdam Nieuwmarkt. This is where the rich history of the company began, with the sale of herbs and spices.

And the company not only has history, but also a chunk of nostalgia. Nostalgia especially for the old and trusted trading of herbs. The scent so characteristic of the ridge-filled spice warehouse in Limmen revives memories of the days of the V.O.C., when the intrepid East Indiamen brave the oceans to fill their holds with oriental herbs and spices.

But it was also the time of the spice traders of the North Holland spirit lands who offered their goods for sale on the Amsterdam Nieuwmarkt. 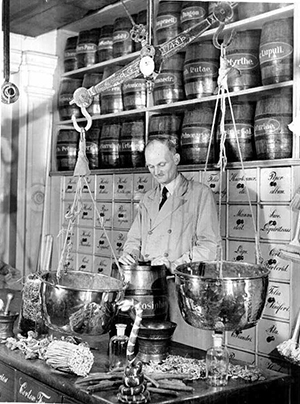 Employee Piet Heerschop mixes herbs in the old copper bascule from 1743, which Jacob Hooy probably used between 1747 and 1778, when he was still on the medicinal herb market on the Kloveniersburgwal. Photo 1952

And in the midst of those turbulent years, Jacob Hooy was born in November 1722 in the Lange Leidsedwarsstraat in Amsterdam. As the son of a “tug” he was the founder of what later became “Jacob Hooy & Co. since 1743 ”. And now, more than 270 years later, this name still stands for craftsmanship and quality.

At the age of 21, Jacob opened his first shop in dryers on the Barndesteeg and two years later he moved to the now well-known shop on the Kloveniersburgwal. Although the company has been owned by the Oldenboom family since 1846, the name Jacob Hooy has always been retained.

The Amsterdam canals with its stately warehouses of yesteryear are also still there, but the activity surrounding the loading and unloading of the herb ships is unfortunately past glory. But around the herbs, teas and spices of today, there is still the mystique of the strange and the aroma of the distant. And at the Limmen wholesaler you can still taste, from the raw jute bags and bales, the smell and taste that have been so characteristic of this hard-working family business over the centuries. With his interest in and knowledge of fruits, flowers, plants, roots and seeds, Jacob Hooy continues to value everything that is natural and original. Jacob Hooy shares his knowledge and supplies to wholesalers and retailers all over the world.

The designation Royal Warrant was introduced in 1815 by King Willem I and, together with the designation royal (1806), is one of the oldest Royal decorations in our country. This designation gives Jacob Hooy the right to use the Royal Coat of Arms, with the addition “By Royal Purveyor to the Royal Household”.

Her Majesty the Queen has awarded this designation Royal Warrant to Jacob Hooy. Jacob Hooy was founded in 1743 and is therefore more than a hundred years old and the entrepreneurs are of impeccable behavior. Jacob Hooy is one of the 383 companies that can call themselves Royal Warrant Holder.